For centuries mariners of the Nordic Seas have told tales of unexpected encounters with fierce storms that appeared out of nowhere to wreak havoc on the seas. With the onset of satellite imagery meteorologists identified them as shallow and short-lived low pressure centres forming over polar seas, naming them polar lows. 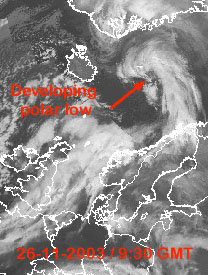 Polar lows are defined as small but intense maritime meso-scale cyclones that form in cold polar or arctic air advected over relatively warmer water. Polar lows are much smaller and more transient than a regular mid-latitude depression. Their scale varies between 100 to 500 km and typically they last for anything between 12 to 36 hours.

However, polar lows show a very characteristic pattern and life cycle during which they produce severe weather, heavy precipitation - usually falling as snow, and strong surface winds. Triggered by convection they develop over water, typically westward of an 'old' occluded regular low. In their developing phase they can be detected from satellite imagery as a typical comma cloud feature.

In mature stage the most prominent hallmark of a polar low are the spiral cloud bands often forming a clear eye at the the centre of the cloud vortex suggesting an analogy with tropical cyclones. This is why such systems are also known as Arctic hurricanes. Mean wind speed varies around 15 m/s which is 'only' Bft 7 or 'near gale'. However, frequently strong wind gusts easily reach Bft 10 and thunderstorms and even waterspouts are possible. Heaviest snow showers and strongest winds are located close to the centre, winds within the 'eye' are calm. Temperatures are dropping sharply with the passage of the storm centre causing an extremely high risk of icing over sea.

Like their tropical cousins Polar lows tend to decay rapidly with landfall, mostly due to the lack of warm moisture supply from the relatively warm sea. Some polar lows, however, can produce blizzard conditions over land. Such polar lows often have well-defined fronts rather suggesting similarities to the usual mid-latitude cyclones. Today we know that polar lows are a quite frequent feature of relatively warm ice-free waters within polar regions. For example the Nordic Seas, The Labrador Sea, the Gulf of Alaska and the Sea of Japan, but they are also common over polar waters of the Southern Hemisphere.

In the Northern Hemisphere polar lows are most common during winter, followed by the autumns and spring seasons, while there is no seasonal variability in the Southern Hemisphere.