Glaze is a thin coating of ice that forms when supercooled liquid precipitation, such as freezing rain or drizzle, fall onto exposed objects whose temperature is below or slightly above freezing. Although the droplets freeze almost instantly, they have sufficient time to spread out into a thin layer before doing so. As a result the surfaces becomes coated by a smooth compact deposit of clear ice. Glaze is denser, harder and more transparent, than either rime or hoarfrost. 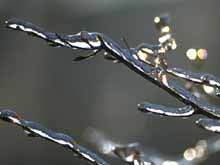 Glaze often forms ahead of an approaching warm front in a depression. When the air temperature ahead of the front is lower than 0° C, any rain or drizzle that fall from the moist, warm air overhead, will be transformed into glaze when it hits the ground. Slow-moving or even stationary fronts blocked by a winter anticyclone may accumulate thick layers of glaze. Such an event is known as ice storm. Ice storms may be extremely destructive, breaking down trees, telephone and powerlines just by the very weight of the accumulated ice. 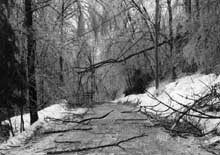 Another form of glaze may sometimes be created when warm, humid air-masses suddenly bring a thaw to a region that has been undergoing severe frost. Then objects are still cold enough to freeze the condensing watervapour, covering them with a coating of ice. These conditions occur rather frequently in eastern central Europe and across North America. This form of glaze is known as silver thaw

Another popular term related to glaze is black ice. Generally black ice is a thin sheet of clear ice or glaze, which is rather dark in appearance. Black ice is often mentioned in road weather forecasts. It is so dangerous for motorists, because, visually, the road appears wet, rather than icy. Under black ice conditions drivers should be prepared to expect little to no traction, little to no braking capability, extremely poor directional control, and the high possibility of skids. Best thing to do is to stay off the road if possible.