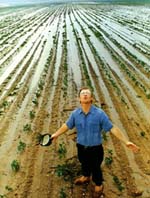 Although showers and thunderstorms last Thursday broke the drought over most of southern, central and eastern England, a few places in Yorkshire, Lincolnshire and East Anglia have yet to record any significant rain this month. April has a justified reputation for being a dry month, and droughts at this time of the year are regarded with apprehension in farming circles and by the various regional water companies because a continued absence of rain during the rest of the spring could lead to water shortages during the remainder of the year.

There have been been ten very dry Aprils during the last hundred years with rainfall, averaged over England and Wales, of 25mm or less, compared with the long-term average of 57mm. The most recent of these was in 1997, and this was the last time we had a rainless period as long as this month's one. Four of these, 1912, 1938, 1957 and 1984, were outstandingly dry, the rainfall during these months being below 12.5mm; on each of these occasions small areas of the UK recorded no rain at all during the entire month.

Drought can be defined in many different ways, depending on your particular concerns. Most simply, a meteorological drought may occur when rainfall during a specified period falls below a particular threshold. For instance, in Britain this may be represented by a 50 per cent deficit over three months, or a 15 per cent shortfall over two years.

The water-supply industry require adequate winter rain to make sure reservoirs are full and ground water is topped up. Thus a hydrological drought might be said to occur when winter rainfall fails to counteract the soil-moisture deficit from the previous summer, or reservoirs are insufficiently replenished. This sort of drought can extend over a period of several years even though intervening summers may be rather damp. Such conditions prevailed between 1995 and 1998.

An agricultural drought happens during the spring and summer - the growing season - when evaporation normally exceeds rainfall anyway. During a settled year when the weather charts are dominated by high pressure systems, rainfall is low while evaporation is higher than average thanks to increased sunshine and rising temperatures. Growing plants suffer stress caused by a shortage of moisture and nutrients, and this leads to reduced growth and lower crop yields. If the moisture deficit continues indefinitely the plants will ultimately die.
br>The most outstanding spring drought in the British climatological archives happened in 1893. That year delivered an exceptional spring of heat and sunshine, and rain fell on only a handful of days. The dry weather set in during the first week of March and lasted until early July. In the London area there was only 35 per cent of the normal rainfall during the four months from March to June inclusive; at Mile End in east London no measurable rain at all fell between March 4 and May 15, a period of 73 consecutive days, while Twickenham in Middlesex reported 72 successive days with no rain.